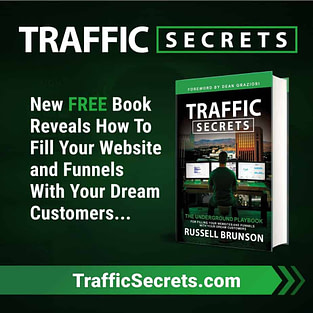 ClickFunnels, an overpriced software or is it something you need? What is ClickFunnels? And is it correct what Russell Brunson, the co-founder of ClickFunnels have told us, that websites are now dead? Read my ClickFunnels Guide to know more.

Table of Contents
I'm a funnel hacker, and this is my story
What is ClickFunnels?
So who is Russell Brunson?
The story behind ClickFunnels
The ClickFunnels Guide

I'm a funnel hacker, and this is my story

I knew about ClickFunnels sometime before I started to use it. What I heard was that ClickFunnels was an overpriced software that I didn't need. The reason behind this statement was I got access to software through a membership I joined. We were told that with this software, that was awesome, we didn't need ClickFunnels and saved a lot of money. They were sort of correct that we saved money, but the software was crap. Luckily I didn't need landing pages at that time. I will not mention what software this was because it was so bad. Maybe they have improved it now, but I have my doubts.

Later I was introduced to Thrive Architect. This software was great to build landing pages, so I decided to give it a try. I wanted to collect email addresses and start doing email marketing. I spent some time with Thrive architect, and I liked it. It was much cheaper, and I made beautiful (in my eyes) landing pages where I collected email addresses. For that it was great.

Then a couple of months later, the same guy that introduced me to Thrive Architect, made this done for you affiliate business with ClickFunnels. His sales message was great, and if I started ClickFunnels free trial, I would receive his funnels, emails, and training in how to start my new business.

I was sold and joined the free trial and went through his course. This funnel with training was in itself a method to make people give me their email address, if they didn't go for ClickFunnels, I could try to promote other software that people in my email list hopefully needed.

I joined the free training inside ClickFunnels that was sort of a how to use ClickFunnels and taught me the basics. Later I bought Russell Brunson's books since this was advised to promote his books. I don't like to promote something that I have not bought myself. It was when I read DotCom Secrets I was hooked. The information in that book was fantastic, and it was at that time my dreams become more real. It was during both DotCom Secrets and Expert Secret I indeed became interested in marketing and began to understand how this should be done. One thing is to understand it, another thing is to do it. But I made a big step in the right direction.

ClickFunnels is a funnel builder software where you can mainly build landing pages and linked sales pages named sales funnels. Does it sound boring? The same did Russell Brunson think and that's why he has made so much more out if. He has created training, some are free, and some are paid. Russell has written books where he teaches everything he knows about marketing.

Both the books and training is made around ClickFunnels where he tries to make you successful by using his software. The results are a community of fans where he has changed the life to many people. So who are Russell Brunson? He is the co-founder of ClickFunnels and the CEO, more about him later.

You can also make small websites with ClickFunnels, but the main reason for using ClickFunnels is to send people to a page where you lead the visitor through a logical path you want them to go. Instead of a webpage where you can go in many directions and maybe get lost. They get busy with all the information you have for them and decide to check out your offer later. And later means never…

This was a short introduction to ClickFunnels, I will guide you through the software in more detail in

So who is Russell Brunson?

He started his interest in marketing as a child when he watched some tv shop shows. Then he began to call to different advertisers for free reports. The reports were basically long form sales letter that he read where they tried to sell him something.

The story behind ClickFunnels

At one time Russell Brunson made several sales funnels. This process took time since he was not a technical person, he needed several people to create one funnel. This was something that made him frustrated. Some funnels was a success while others failed and he wanted to test this fast.

So one day a coder named Todd Dickerson told Russell that he could make software that made this process much easier. Russell had hired Todd in several projects before and loved the idea. So they decided to become partners, and this was the start of ClickFunnels. A funnel builder software made for entrepreneurs like Russell.

If you like to know more, you can learn when and how ClickFunnels was founded in my post here.

So this was a short introduction to ClickFunnels and Russell Brunson. Below is what I got for you, so I hope you are excited.

Chapter 1: What is Clickfunnels - A introduction
This post. An introduction to ClickFunnels and Russell Brunson.

Chapter 2: What is a sales funnel (with examples)
Value ladder and offer creation is an important part of a sales funnel. In this chapter, you will learn about them both, in addition to what a funnel is. You will also see examples of multiple funnels from both Russell Brunson and Ryan Levesque. Two people that have made a very good system on how to create funnels and when to use them.

Chapter 3: What is ClickFunnels
ClickFunnels started as a funnel and page builder, but have expanded to so much more. In this chapter, you will learn more about ClickFunnels, the pricing, and what you will receive.

Chapter 4: Why use Clickfunnels
So why should you use ClickFunnels? Maybe you have a website run on WordPress, do you need to switch to ClickFunnels now? In this chapter, you will learn why I think you want to use ClickFunnels, and maybe you will discover that WordPress still is the best platform for you to use?

I'm a father of two children and they are very important to me. The 9 to 5 world with small children can be tiresome and I want to break free.So join me on my path to online income where I find the best way so you can do the same!

Expert Secrets PDF: Can you download the book for free?

How To Create An Affiliate Funnel